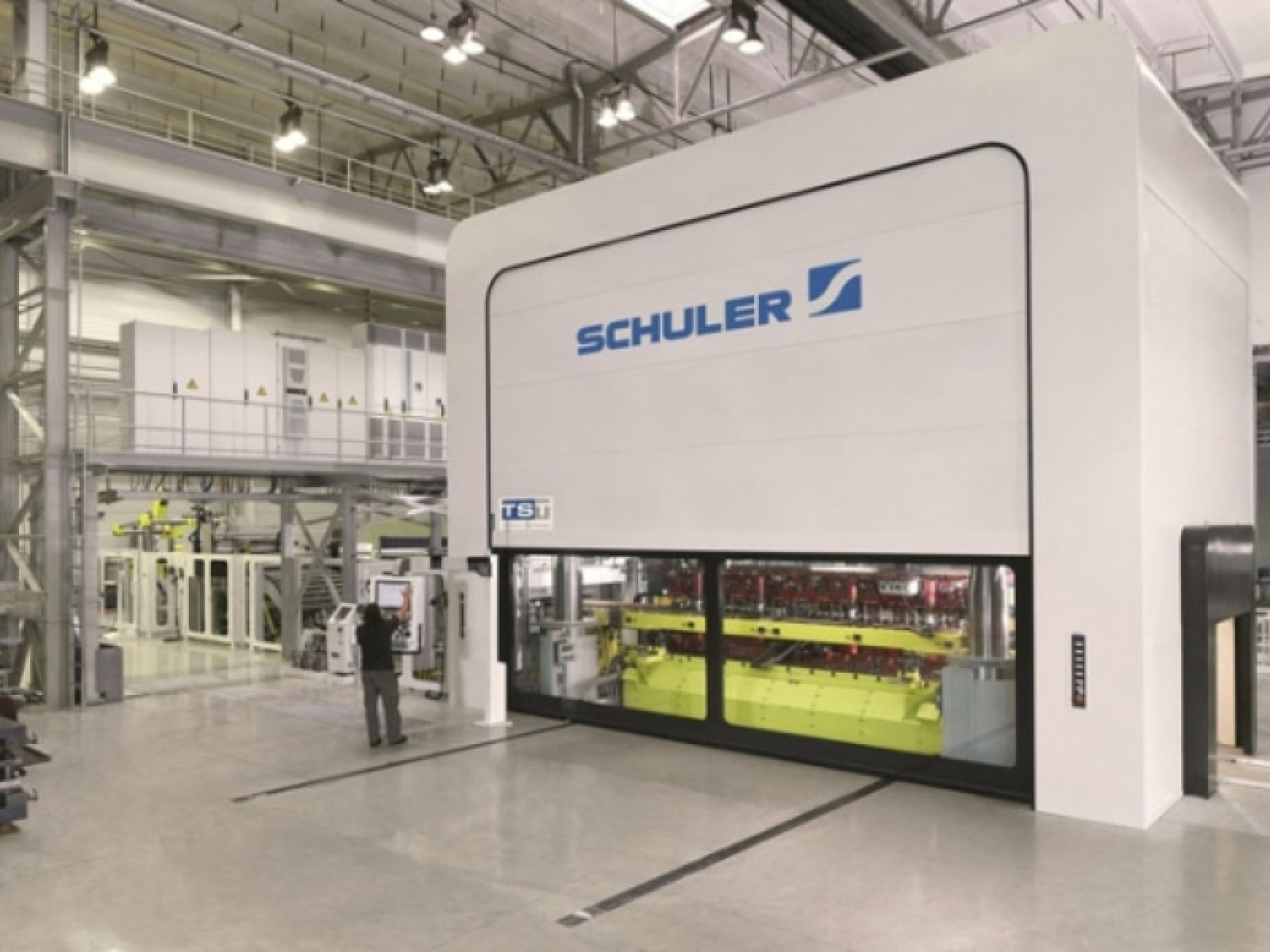 In the presence of some 300 political and business leaders, press manufacturer Schuler today presented its latest innovation in Erfurt: TwinServo Technology (TST). This further development of Schuler’s successful ServoDirect Technology (SDT) offers metalforming companies around the world a new compact design and new drive concept featuring two servo motors.
Schuler’s Chief Technology Officer, Joachim Beyer, unveiled the prototype at an official evening event attended by Thuringia’s Economics Minister, Matthias Machnig, and the mayor of Erfurt, Andreas Bausewein. At its UmformCenter Erfurt facility, Schuler will be using this first transfer press with TwinServo Technology to produce small batches for customers in the automotive industry as well as to conduct die tests together with its customers. The new line has a press force of 1,600 metric tons and is fully equipped with automation components from Schuler Group companies. In combination with the new press technology, the coil line, roll feed, blankloader and three-axis transfer ensure economic, flexible and reliable part production.
“We are certain that our latest development will raise a few eyebrows in the sector and strengthen our position on the market,” stated CEOStefan Klebert in his speech. “TwinServo Technology will continue the success of our ServoDirect Technology launched five years ago, which has since established itself as the industry standard.” “For our customers in the automotive sector, it represents an interesting alternative in the field of transfer and progressive die presses,” added Board of Management member Dr. Markus Ernst.

“Growth needs innovation. Schuler Pressen GmbH is an innovation and technology leader which stands for the success of the engineering industry in Thuringia,” statedThuringia’s Economics Minister Matthias Machnig. “Such a company represents a tremendous boost forThuringiaas a location for the engineering industry. In 2011, the sector enjoyed year-on-year sales growth of 17.2 percent. This trend is continuing in 2012. At the same time, the company depends on its international alignment and its global network of facilities – a further decisive factor for success and growth.”

“Umformtechnik Erfurt has the longest tradition of any engineering company in Thuringia’s state capital and is thus an important employer for Erfurt and the region,” stressed Erfurt’s mayor Andreas Bausewein. “With its new, innovative press technology made in Erfurt, Schuler Pressen GmbH is not only securing existing jobs here but laying the foundation for more orders and thus for further growth at its traditional facility in Erfurt.”

Thuringia’s Minister President, Christine Lieberknecht, had already gained an impression of Schuler’s Erfurtfacility at midday. Schuler CEO Stefan Klebertshowed her the newly developed press built in Erfurt. During a tour of the production halls, he informed her that over ten million euros had been invested in the factory. The Minister President also visited Schuler’s training workshop in Erfurt, famed for its successful apprentices: at national and international competitions in “Mobile Robotics” where logistical and production tasks have to be solved with the aid of robots, the plant’s apprentices are regularly among the winners and have even won European championships.

More information on the new TwinServo Technology will be provided at the EuroBLECH fair from October 23 to 27, 2012 inHanover,Germany. Schuler will be presenting its products at Stand D40 in Hall 27. A press conference is likely to be held for journalists in the Convention Center on Wednesday, October 24, 2012, at 1 p.m..